A friend of mine is coming to São Paulo and is asking for some advice for a 11 hour flight connection wait in Guarulhos.

So, this is a small guide for a one or two days trip.

How to leave the airport
São Paulo has two airports: Guarulhos (GRU) and Congonhas (CGN).
Most international flights leave from Guarulhos, which is a city just by São Paulo.
Airport Bus Service
I don't think there's a place for leaving your luggage in the airport when you arrive.

In São Paulo
I suggest to stay on the subway (metrô) line while you are in São Paulo. Even for me, it's just must easier and you will not get lost. Bus' tracks are hard to understand and follow. It's a very small subway compared to other cities, but that's what we've got.

Only the lines with this symbols are the subway, the others are train lines.

When visiting the city, you might mainly use the blue line to see different interesting parts of the city. 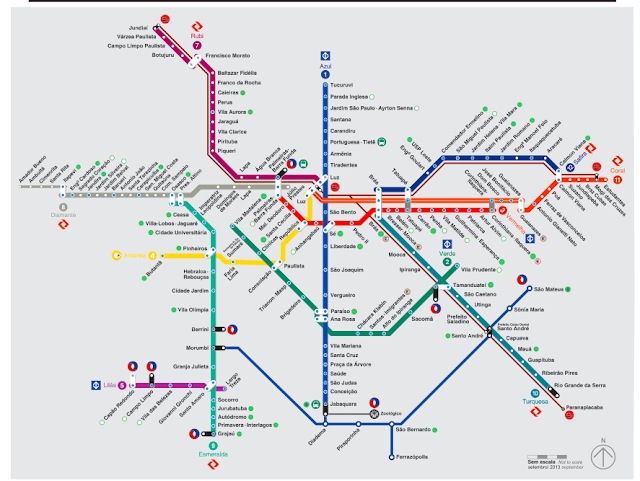 Torre Banespa (Banespa Tower)
Close to the station "São Bento", on the blue line.
The tower belongs to an old bank, and is one of the highest points of the city, amazing for getting a dimension of the cement jungle.
It costs you nothing to go up, but you must present and ID card, and wait for your turn in the elevator.
The tower is open for visits from 10 to 17h00 from Mondays to Fridays.
Address: Rua João Brícola, 24.

Estação da Luz & Pinacoteca do Estado
It's a beautiful part of the city, with the old train station, Pinacoteca Museum and Luz Park.
All in "Luz Train Station".
Pinacoteca is a museum located in an old building (which is rare for us in Brazil), with good expositions. Entrance is free sometimes (check the page).
In Luz Station is also located the Portuguese Language Museum.

Liberdade
Liberdade is the japanese district of the city of São Paulo,  and São Paulo is the most japanese city in Brazil.
Brazil is the country that has received the biggest japanese migration in the 20th century.
I really recommend it for the good food, nice shops, and different atmosphere.

Sé Cathedral
Close to Liberdade, Sé Cathedral is a beautiful church in the middle of the city, it's also it's middle point. Not the safest place in the the world, but worth the visit. Just pay attention to your stuff.

Avenida Paulista
The Brazilian Times square. Cultural and Financial center of the city. Walk under MASP museum, take a look around Augusta Street, and see the diversity of the big city.

Ibirapuera Parque
Museums and green area in the same place.

EATING
If this is all the time you have in Brazil, then:
In a bakery (Padaria):

If you want a proper meal, the best vegetarian restaurant in town (they are 2)
Gopala Hari & Gopala Madhava

WHERE TO STAY
Saci Hostel - I've met the owners years ago during a course, and I guess they have a good initiative.